BMW i8, a few days after the start of production 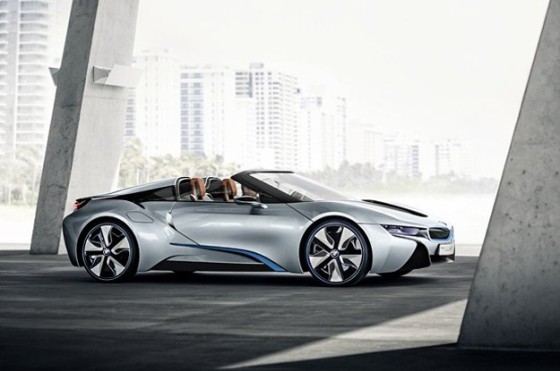 The German brand vehicle builder has been hard at work in relation to the design and subsequent production of one of its most important car for several years, is neither more nor less than the BMW i8, a very nice machine, both inside out, with great mechanical ability and speed.

Style your body well with the youthful atmosphere that prevails in the streets and avenues of the city, and the shiny gray with those details in blue and black; create an atmosphere of luxury and at the same time modernism. The section of the roof is outdoors, plus your tires reach 19 inches in diameter.

In the front of the BMW i8 can be seen clearly inlets, a spoiler is made ​​using carbon fiber skirts and wind outputs on the side doors, wheel arches have been bulging for greater aerodynamics and stability progress. The chassis is barely off the ground, it ensures a better grip on all four tires.

Seen from an aerial perspective, the BMW i8 shows her sexy side, I mean a car with a combination of very ambitious colors, metallic gray on the front, black in the center of the hood, air vents right in the middle of the lid trunk, and two very comfortable seats upholstered in brown leather.

The BMW i8 will start mass production in April, which is why the firm that already has begun to reveal many of the most relevant data, I speak primarily of cosmetic and equipment forming part of the fuel system. Regarding the latter, the BMW i8 will block Twin Power Turbo 1.5-liter, three-cylinder.

Will also associated with other electric motor powered by a lithium-ion battery, when both work full communion, the car is able to deliver an equivalent development 362CV power, that’s like saying a 266 kW respectively.

Speed is one of the cornerstones in the characteristics of the BMW i8, I mean an acceleration of 0-100 km / h in just 4.4 seconds, or a electronically limited to 250 km / h maximum speed. The consumption of the vehicle does not exceed 2.7 liters per 100 kilometers of travel, even letting out 49 grams of CO2 per kilometer.